The Symposium explores the concept of visual alterity from two different angles, considering, on the one hand, the perception of cultural difference in dance, fashion photography and contemporary cinema, and, on the other hand, ways of seeing differently, drawing on experimental cinema, video games, music video and virtual and augmented reality. 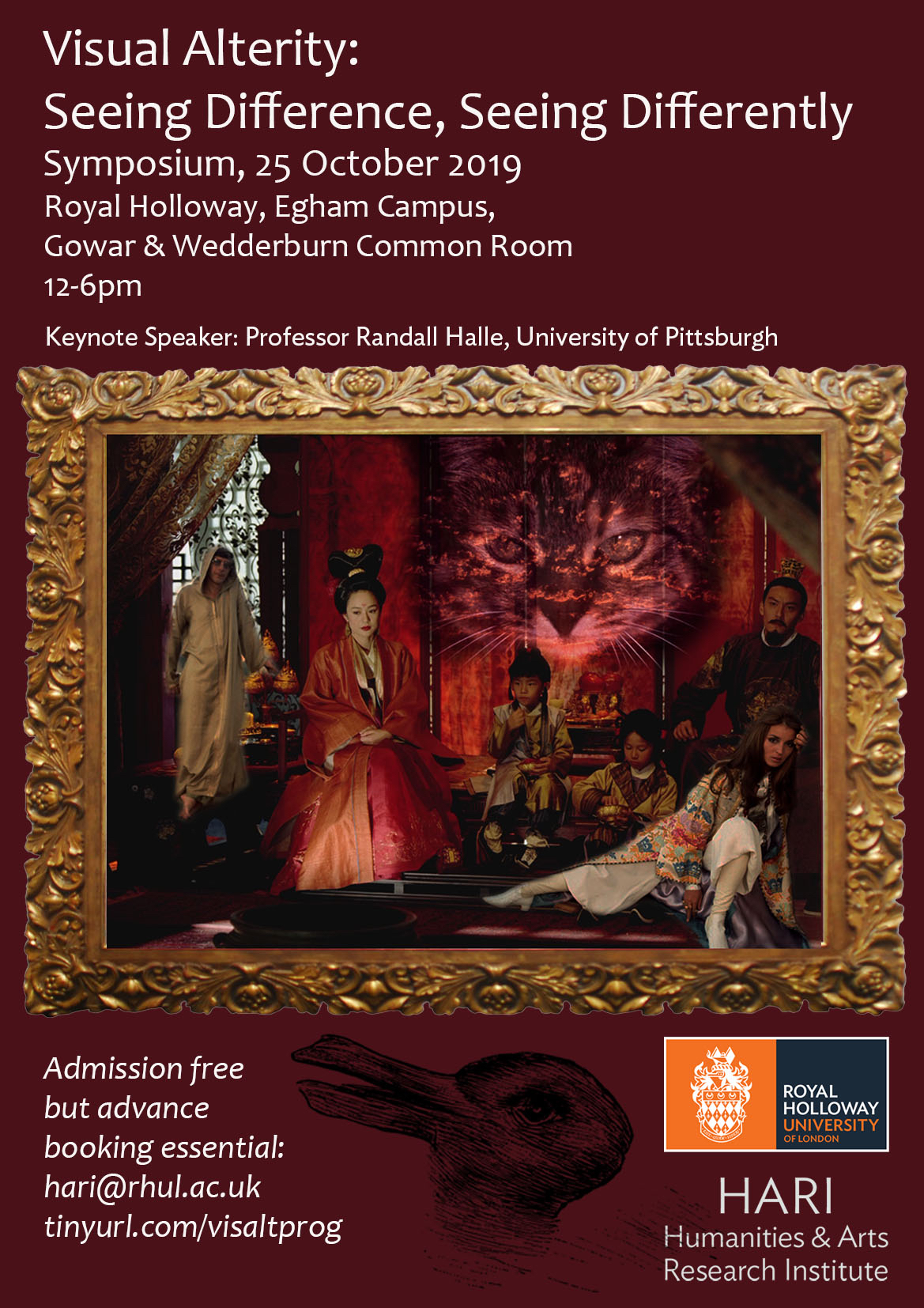 Although first and foremost, the term ‘visual alterity’ conjures up visions of Othered cultures, it also denotes ways of seeing differently which moving image technology and virtual reality within simulated and immersive environments make possible. Multi-stable images, visual illusions and digital technologies that have the capacity to augment reality or to transport and immerse viewers into a different, non-physical reality challenge our sense of the real and invite us to see differently. An interdisciplinary symposium hosted by the Humanities and Arts Research Institute at Royal Holloway

A Visual Presentation and Q&A with John Bulmer

The Transnational Appeal of Exoticism in World Cinema

Reconceptualising the Veil on Screen

The Child Protagonist as Universal Other in World Cinema

Visual Alterity: The Kippbild in Film, Music Video and Games

From 1967 to her early death in 1971, the fashion establishment persistently extolled the confluence of East and West in the background, sartorial choices, décor and lifestyle of Talitha Getty,  Indonesian-born Dutch socialite (1940-1971), acclaimed ‘queen’ of 1960s Marrakech and avatar of haute bohemian style. The acme of this validation was a feature in US Vogue entitled ‘Moroccan Wake-Up: The Paul Getty, Jr. House in Marrakesh’ (1970), the accompanying photographs by Patrick Lichfield, and the consequent transference of Getty’s mythic qualities to her Moroccan residence, Le Palais de la Zahia. One of the photographs of the Gettys, lounging in a Marrakech rooftop in their Moroccan finery, now held in the National Portrait Gallery, has become an emblem not just of Morocco’s possibilities for indolent luxury, but of the heady excitement of the swinging sixties.

In my talk, I will discuss the commissioning and making of the editorial, its artistic antecedents and some of the fashion collections, lifestyle choices and fashion photography it has inspired, as well as the highbrow associations it has accrued in the output of a small coterie of intellectuals: the philosopher Bernard Henri-Lévy (‘Qu’est-ce qu’une nature morte’ (2007)), the journalist, publisher and literary critic Jean-Paul Enthoven (Ce que Nous Avons Eu de Meilleur (2008)) and the realist painter Rafael Cidoncha (‘Naturalezas Vivas’ series (2002-2006)). Some of the questions the discussion will answer include: To what extent were the photographs of the Getty’s a self-representation rather than a projection of the editor and photographer’s images of the ‘orient’? In what ways has Talitha Getty’s psychologically and culturally complex orientalism been diluted and commodified in some of its present-day permutations? Why have the editorial and its lead photograph have such enduring appeal and what could be done to harness its imagery to more productive modes of intercultural communication?

A Visual Presentation and Q&A with John Bulmer

John Bulmer, a pioneer of colour photography in the early 1960s, who worked for the Sunday Times Magazine and other high-profile publications,  photographed Getty in a  follow-up to  Patrick Lichfield’s photographs for Vogue. These were to be published in The Sunday Times, ended up in Harper’s Bazaar, and have not circulated since then, They are very interesting for what they say about Getty’s self-projection.

The Transnational Appeal of Exoticism in World Cinema

Exotic cinema’s transnational appeal is in large measure due to its opulent visual style and the sensuous indulgence it affords spectators. When world cinema circulates transnationally and traverses borders interpretative challenges and hermeneutic deficits arise which are effectively compensated by exoticism’s powerful visual allure. Where a film’s deeper meaning is inaccessible, its sumptuous style shifts the attention to the surface. In other words, the visual and sensuous pleasure afforded by exotic spectacle is the chief vehicle that allows ‘films from elsewhere’ to travel and be understood, or misunderstood, as the case may be, by cultural outsiders who are potentially disadvantaged by a deficit of culturally specific knowledge when trying to make sense of films from other cultures. The paper will draw on The Assassin (2015), Hou Hsiao-hsien’s first foray into the wuxia genre and Everlasting Regret (Stanley Kwan, 2005) as its principal case studies.

This performance lecture focuses on decolonizing exhibition practices and colonial archives. It offers a brief survey of literature on nineteenth-century colonial exhibitions and world’s fairs as a cultural practice and the complicity of academic disciplines such as anthropology and ethnology in promoting violent forms of pedagogy. Next, the talk examines the failed Liberty’s 1885 exhibition in London, specifically analyzing the nautch dancers from India whose moving bodies both engaged and disrupted the scopophilia framing such live human exhibits. It pays particular attention to the dissenting voices of subaltern and marginalised dancers whose corporeal acts resisted the violence of British Empire. In the final section, the talk examines how re-imagining the Liberty’s nautch experiences by embodying archival slippages might be a usefully anarchic way of exhuming the memories of those dancers forgotten by both British and Indian nationalist history. This talk delineates the structural limitations of reenactments, a current trend in contemporary Euro-American dance, and argues that historical fiction as a corporeal methodology might be a viable decolonizing strategy for dance studies.

Reconceptualising the Veil on Screen

As the juxtaposition of France’s controversial banning of the ‘burkini’ in 2016 and Saudi Arabia’s lifting of the ban on women driving the following year illustrates, the bodies and identities of Muslim women are continued subjects of concern, confusion and contestation in both Europe and the Middle East. Women, more so than men, are the carriers of local traditions and values – their bodies indicators of social and spatial relations.

Drawing on transnational feminist and theories of space, this paper undertakes two readings of the veil worn by Muslim women in European and Middle Eastern cinemas.  In relation to two diasporic European films, it explores the Eurocentric representation of the veil as a symbol of female oppression and the emblem of Muslim women’s status as ‘Other’ in European society.   Conversely, in my analysis of two Middle Eastern films, I examine the veil as being inherently spatial; it becomes a portable, female space within which women may enter the male, public sphere. In this context it emerges as a symbol of mobility and change.

The Child Protagonist as Universal Other in World Cinema

World cinema has to navigate a fine line in order to be appraised internationally. If too exotic, then it is culturally alienating; if too universal then dismissed as ‘too western’, lacking a distinctive feature in a market seeking windows onto other worlds. This highlights the geopolitical and aesthetic biases at play in the superficial interactions with foreign cultures that shape the international reception of world cinema. Focusing on two Iranian films about children, Where is the Friend’s Home (Kiarostami, 1987) and The White Balloon (Panahi, 1995), this paper identifies how the promise of a new perspective, a re-education of the gaze through the eyes of a foreign child – on the margins of their adult world and rural settings, hence multiply ‘othered’ – struck a balance between exotic and universal for cosmopolitan international audiences. Child protagonists, relatable and resourceful, induce empathy and represent the ‘Other’ before their ‘foreignness’ becomes fully inscribed in a culturally specific way. However, this erases the socio-historical grounded-ness of these texts, ‘primitivising’ the cultures associated with them. Drawing connections with the international reaction to Satyajit Ray’s Pather Panchali (1955), this paper examines how the ways in which world cinema travels and is ‘translated’ into new viewing contexts, shaped by shifting notions of universalism and exoticism, can tell us much about the landscape of international film culture.

This presentation will provide an overview of how digital technologies, including virtual reality and augmented reality, create opportunities for constructing immersive storytelling environments and for seeing differently.  Drawing on a number of case studies from the AHRC-funded StoryFutures (www.storyfutures.com) project and the National Centre for Immersive Storytelling at Royal Holloway, the presentation will discuss the growing demand for VR in the entertainment industry and provide an overview of the project’s main research findings to date. It will be richly illustrated and there will also be opportunities to experience VR via headsets for those who wish to do so.

Sandhya Suri is a filmmaker based in the United Kingdom. Her features include the documentaries I For India (05), and Around India with a Movie Camera (18). The Field (18) is her first short film. I have collaborated with Sandhya Suri before and she has presented and discussed her film I for India at a conference I organised a few years ago. Although I have not yet had a response to my email invitation, I am confident she will accept it.

Visual Alterity: The Kippbild in Film, Music Video and Games

Is it a Rabbit or a Duck, and old lady or a young maiden? The Kippbild, from Gestalt psychology a German term, designating those “images that suddenly switch,” a multistable image, has a long history. We can find bistable or reversible figures, optical illusions of this form in antiquity. The Kippbild captured popular imagination and has been at the centre of philosophical and psychological investigation. The Kippbild points to fundamental processes of perception, the activity of the mind in completing our world. It entertains because it gives us a sense of play in the moving image—and it did so before the projected moving image took on its modern form. The multistability of the Kippbild as a property of the moving image, has been deployed in various projects by moving image artists from the Absolute Film of the 1920s to art installations like Unsettled Work/Eine unerledigte Arbeit (Fischli and Weiss 2000-2006), from video games, or music videos by groups like Chairlift (Evident Utensil),and Kanye (Welcome to Heartbreak), to 3D projects and beyond. This presentation thus explores the possibilities of cinema beyond montage. It asks you to consider what other effects inhere in the moving image? What other possibilities has cinema developed for affecting its spectators? This presentation is part of a larger exploration of visual intelligence under the heading Visual Alterity: Seeing Difference Differently.